have had many consequences on our freedom, safety and well-being. But there have also been compensations for different groups of people, notably bringing new and different interests. One of these has been a greater awareness of the wildlife surrounding us. My particular effort has been finding out what goes on around us in the garden and its immediate surrounds. My daughters realised this and bought me a trail camera, which has become an important part of life since. It involved an intense learning process which is still on-going, despite the fact that these cameras are completely automated. Early results were poor, initially blamed on the camera, but which in fact involved a number of other factors. Now, a year later, I am more than satisfied with the results but am also looking forward to developments which are sure to come in the future, as well as introducing even better fieldcraft into the equation. Where is the best place to locate a camera, how to set it up? An ancient 'badger' trail through our garden yields many records of Badgers, Foxes, Rabbits and Roe deer, plus various less frequent visitors. This has served as our focal point, used by animals throughout the year, a place to concentrate upon.

What is a trail camera and how does it work? I believe they were developed originally for hunters in the USA who wanted to know where to put their blinds and follow the seasonal movements of their prey. Since then, they have come on apace, headed by the remarkable results in BBC and other wildlife films, where quality is sufficient for television broadcasts. My camera is a miracle of precision in a small package, waterproof, producing high-class results. It can be left outside for weeks on end and appears to have almost endless battery life, at least for still pictures. The camera still registers full battery capacity after a great deal of use over many months. It is also capable of taking relatively short but good quality videos though, to date I have not tried that aspect - the stills fascinate me enough. The camera is contained in a solid casting, the top half fixed, with lenses and sensors on the outside. The lower part contains six lithium or ordinary alkaline AA batteries, and a small colour screen, with controls' all normally covered by a sealed cover. The screen enables the various controls to be set to suit the user's requirements. A slot contains an SD card, maximum capacity 32GB, on which the photographs are stored as they are taken - even higher capacity of up to 512GB may be obtained using SDXC memory cards. The pictures are recorded as JPEGs. This particular camera, a Browning Patriot, has two separate lenses, one for use in daytime, another tuned to night-time. It is worth noting that in the early hours, the camera sometimes decides to produce a hybrid picture, a half-way house between night and day, with black and white images.

The night lens has a noticeably longer focal length than the day version. Daytime pictures are recorded in full colour, of remarkably high quality. Night-time pictures are in black and white, capable of excellent sharpness and detail but, inevitably of unusual appearance because of the flash, provided by numbers of LEDs. These particular LEDS show no outward sign of the flash going off; they operate using only infra-red, ensuring the process does not disturb the creatures on whom it falls. Other cameras may have LEDS that are partly visible in use, which may affect sensitive animals.

There are numbers of points learned over the time of use. All help contribute to better pictures. Set the camera for still pictures, at the 24MP 'ultra' setting (manufacturers often suggest the lowest setting for general use, but why pay for the best and not use it? My tests indicate this does produce optimal results, while the 32GB card has plenty of capacity). One of the more important settings for obtaining top-class results is to click on 'rapid-fire' and set it to around 4, which results in taking this number of pictures 0.3 seconds apart, ensuring that on most occasions at least one image will appear in the centre of the frame. There is more to this though, as will be described later in placing a camera beside a trail. It is possible to adjust the flash to various power settings. Since animals seem to spend much of their time in motion by a trail, I choose 'Fast motion', though even this may not be sufficient if the animal is moving fairly rapidly. The obvious place to face the camera is at right-angles to the trail (we have an ancient trail running up and down the garden). However that shows the animal moving at its relatively fastest speed. If the camera is angled, the relative speed is reduced - and is recommended. The result is that the picture often shows the animal on the edge of the frame - hence the reason for the 4 shot setting described before, to provide more chance of a useable picture. Part of the skill lies in setting the optimum angle for the camera; only trial and error suffices.

Another set of suggestions is concerned with the 'development' of the pictures. Images are recorded as JPEGs, which have their own problems. Any alterations to this type of image affects the quality, reducing it each time a setting is changed, such as contrast or tone; though one factor with JPEGs is that they take up little space. Using other formats, the quality remains unchanged by any such alterations, though the actual file size is far larger. Night shots are well-handled by the camera.

To produce the sharpest, best-toned pictures, I use a somewhat convoluted process, rather than leaving the original JPEG unaltered. It is possible to squeeze more out of the original shot than appears likely at first glance. This is particularly so in the case of night-time images. In many instances, a much stronger view of an animal may be drawn from the background by changing settings such as contrast, brightness or tone. To do this without gradually reducing the quality, alter the image format to TIFF, a lossless system. The card is linked to the computer, the images transferred directly without alteration. In my case, using Nikon Transfer 2, though any system will work. The first edit reduces the number of pictures to those deemed useful. The whole 'film' is then renamed to reflect the month of capture and its overall film number. The next stage is to select all, copy them while changing the format to TIFF. The final stage is to go through those that remain and optimise the settings, at the same time adding the name of the animal to the caption. All these findings apply both to night pictures and those recorded in full colour in daylight. These latter are remarkably sharp as taken but they. too, benefit from brightening-up and other improvements. At this point I leave the size and content of the images as taken. The frame round the image records date and time plus temperature, all useful for future searches. The final stage is to transfer a copy of each image I intend to use on the website into a separate file of finished images, remove the information on the frame edges and blow up any I think will benefit. Full, detailed captioning is added at this final point.

What of the future?

One hope is that colour will be enabled for night pictures, another is that night-time pictures will have flash levels somehow compensated, removing those areas of near-white, over-exposure, that so often lead onto the subject. For daylight colour pictures, sharpness is already superb and grain well-controlled, allowing the picture to be well-cropped. Night pictures suffer excessive grain if they are blown up, so the general rule is to leave the picture close to full size. It would be a great improvement if grain were to be reduced in a later project. Sharpness is already good. 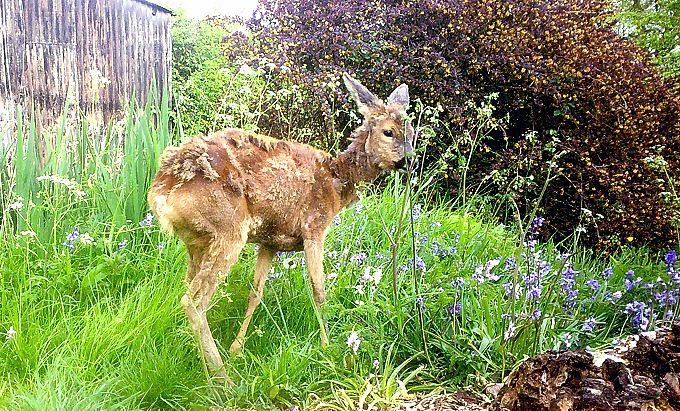