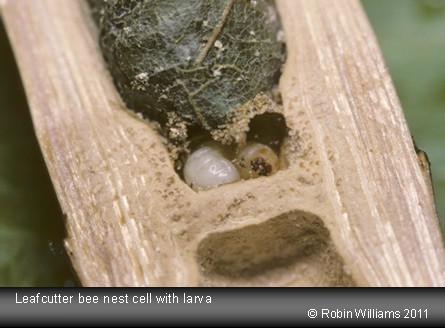 It is fascinating, as well as a considerable ‘time-waster’, to sit and watch the males of many different species searching logs and hollow bamboos for females. Later, females emerge. They join a convoy of others, laden with the particular food their larvae will feed on when they emerge. Although it may look like a colony, they are solitary bees, each choosing the desirable residences rather than the company of others. The insects using these holes, except those that are parasitoids preying on others, construct a series of cells made from material they bring in. They are ‘solitary’ in that the cells are provisioned, eggs laid and the larvae are left to emerge and fend for themselves. Adults play no part beyond this. The active season ranges from the end of April to early October in a good hot year. Anything up to eight individual cells fill the longer holes. These insects have developed methods to ensure they emerge in the right order, as well as ensuring that males appear before the females, so they are waiting to mate when the latter emerge. The males appear a week or so before the females and wear themselves out checking each potential nest hole for activity. Others may even spend nights inside the holes, their eyes peering out of the entrance ready for instant action; such is the competition they face.

LEAFCUTTER BEES cut circles of leaves to construct their nests in the holes, then provision each cell with pollen carried on a brush under their abdomen. 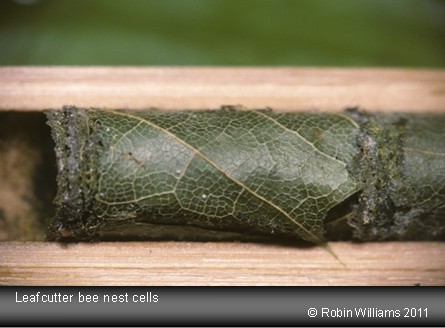 MASON BEES make their cells from mud or chewed up plant materiel and again provision them with pollen brought in on the pollen brush beneath the abdomen. 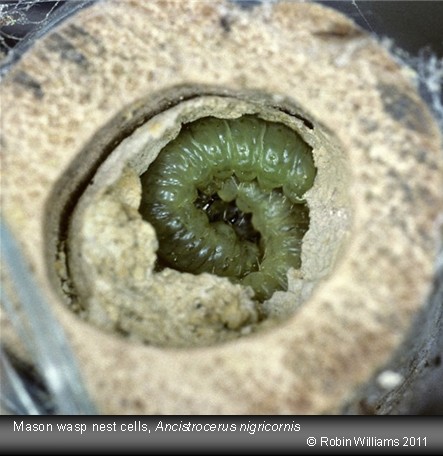 ICHNEMONS AND OTHER PARASITOIDS, inject their eggs into other insects’ larvae, without killing them, then feed off these when they on emerge, a living larder.

CUCKOO BEES or WASPS lay their eggs beside the food store and, on emergence, their larvae consume this, starving out the host, or eventually kill and eat the host larva.

DIGGER WASPS, the largest group of visitors, bring in prey; flies, aphids or other live creatures, which have been stung and paralysed, so as to provide the emerging larva with fresh food. The perfect larder, fresh but constrained.