Hymenoptera in bamboo and drilled logs 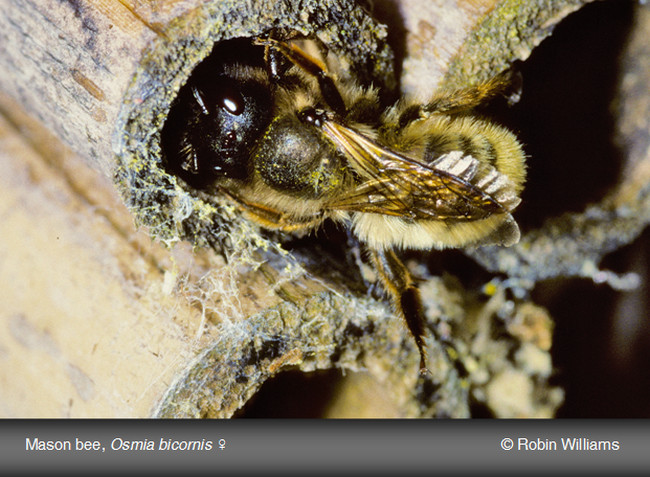 Pollination is a subject that ought to concern all of us. Without suitable creatures to pollinate flowers of all sorts, most would disappear - and so would a great deal of our food. Is this just another form of modern science fiction, a scary 'scenario' over which some 'expert' has speculated? Unfortunately it is not as crazy as it seems. Look around and think of the changes that have taken place over the years. Bumblebees, an obvious example of vital pollinators, have reduced enormously in both numbers and species over the past 50 years but, importantly, numbers fluctuate wildly each summer. While pollination is carried out in many ways, insects have a vital role. Many have evolved to pollinate particular species or groups of plants; some have short, others long tongues, to suit a particular flower. Bumblebees are extremely important. The best way to attract and keep them is to provide a variety of plants, to encourage all types from open flowers to the deeper tubes of other varieties. It is important to have a succession of flowers from mid April to early October, the times during which bumblebee nests ought to be active. During that period, the insects need a non-stop flow of nectar and pollen, without which their offspring will die. In recent years, much strain has been put on the population of all bees, so badly affected by the changing seasons. If a bee is designed to appear during a specific flowering period, then finds that those flowers have already appeared and are withering, it may quite literally starve to death.

Solitary bees are especially effective pollinators, even though specific species may only be active over short times in the year. A solitary bee is a species that makes use of a cavity or tunnel to lay its eggs on a mix of nectar and pollen; the female then dies and leaves the eggs to hatch and the young to look after themselves, without outside help. These insects have suffered a considerable reduction in numbers in recent years, but methods are being developed to encourage them, particularly for pollinating specific commercial crops such as apples. Can we do anything like this in our gardens? Fortunately the answer is yes. It can be done simply, effectively and at virtually no cost, while the solution will provide endless entertainment. The only essential is a hot, ideally south-facing, wall. Many solitary bees nest in decaying wood, even cavities such as locks. It is possible to provide a perfect habitat which they will love (though solitary, they will all flock to a perfect habitat and live side by side, without actually co-operating or working with each other - like us in a block of flats). This ideal habitat can be provided at minimum cost in a number of ways:

• Tying a bundle of hollow plant stems or bamboos together.

Back in 1991, I became interested in this subject and decided to try out a method of attracting solitary bees and wasps recommended by BWARS (Bees, Wasps, Ants Recording Society). They suggested cutting bamboo canes between the nodules, so that one end was closed and the other open, then hanging them in a really warm spot - ideally sunny, south-facing. Various species of solitary bees and wasps would use these to make nest-cells and lay their eggs. The front of my study faces south and there is extensive sun throughout much of the day. At one corner, there was space to hang bundles of these bamboos. The results were amazing, as well as rapid. Within a couple of months the ends of all 100 bamboos were closed by the various types of ‘cement’ used by bees to form their cells. The next summer a great many had insects emerging. In the following years, further refinements were tried. Two old branches, one cherry and the other apple, were stood up against the wall, with holes drilled in their sides, varying in diameter from 3 to 10mm; 8mm being much-favoured by the bigger leafcutter bees. It is important to drill these as deeply as possible so the insects have room for multiple cells. Search for the longest drills available, but do not drill right through the wood. Insects appear to avoid holes where they can see daylight at the end. The next, and most successful stage, was to stack cut logs above each other, with holes drilled in the face, on the end grain. I have been doing this ever since and have identified over 60 species of Hymenoptera using these facilities or visiting. And I am sure there there are a number of others, as I am only able to observe periodically. Not all the insects are bees, but all are important in their own way. All life is represented in there. A number of bees are the principal pollinators, with others cuckoos on these. Wasp species are prominent, bringing caterpillars or living prey to their nest holes, while ichneumons, chalcids and chrysidids prey on the others. They all have their own methods of nest-construction or use, and are an endless source of fascination. I keep a garden chair alongside the logs and spend ages watching the insects arriving and leaving, constructing their cells or just sunning themselves.

While mason bees Osmia spp. seem happy with either bamboo or log, most of the other species, particularly the various solitary wasps, seem to go for the logs. Some of the older branches and logs already had minute beetle holes, many less than 2mm in diameter. Smaller digger wasps may be seen squeezing themselves into these, even managing to turn round and emerge head-first. So a practical range of holes could be said to be from under 2mm up to 8mm, which would suit all likely nesters in gardens. Mason bees bring their nest material in their mouths, in the form of mud or masticated leaves. They form a series of cells inside the plant tubes or holes, each being provisioned with nectar and pollen, divided from the next by a partition. The final closure is by a slightly different material, distinctive for each species. Leafcutter bees make similar-shaped cells, but constructed from leaves. Circles cut from rose-leaves are often used for this purpose. It is amazing to see the insect arrive with a large piece in its mandibles, fly headlong into the hole and emerge only a short while later. While all this is going on, spindly ichneumons insert their ovipositors to lay in or on the living larva - a fresh food store for their young as they emerge. Brilliantly-coloured chrysidid cuckoo wasps, often metallic blue-green or red, rush round testing the nests with their antennae before laying their eggs inside.

Some of the hymenopteran visitors are just that, ants and social wasps using the raw materials for their own nests, or looking for scraps of wasted pollen. But the majority are searching for suitable nest sites in a hot, sheltered place, under full sun. Before setting up these bamboos and logs, I rarely found any of these insects, now each year sees the number of different species increase. This is of particular importance, as it has become clear that all over Britain the number of pollinators have been steadily reducing, with catastrophic outlook for the future.