an introduction to British families

HYMENOPTERA are among the most economically important groups of animals, with some species responsible for destroying huge quantities of crops, while others are predators controlling the ravages of other insects. Many species are important pollinators of flowers and trees; the world is facing problems with crop pollination as insect numbers have declined in recent years. Hymenoptera is an extensive order, with over 100,000 species described worldwide. In 2011, my MapMate database contained over 11,300 records of 764 species. 6900 of these records come from Vice-counties 5 & 6 (the ‘old’ county of Somerset), covering 675 species of Hymenoptera.

Studying this varied and fascinating order faced me with a huge amount of research. Many of the keys for species identification go back over many decades. During this time, technical terms inevitably change. Without a comprehensive guide to these terms, it is impossible to make sense of many older keys still in use. Eventually this led to the production of a book of scientific and descriptive terms to fully understand the various keys used for identifying the many species involved (‘British Hymenoptera: glossary for use with identification keys’).

The Order Hymenoptera does not have a collective English name but it is divided into three sub-orders that do.

SUB-ORDER SYMPHYTA – Sawflies & Wood-wasps (without an obvious waist). Vegetarians, in spite of the latter's fearful-looking protruding ovipositor. They lay their eggs into slits they saw into stems. 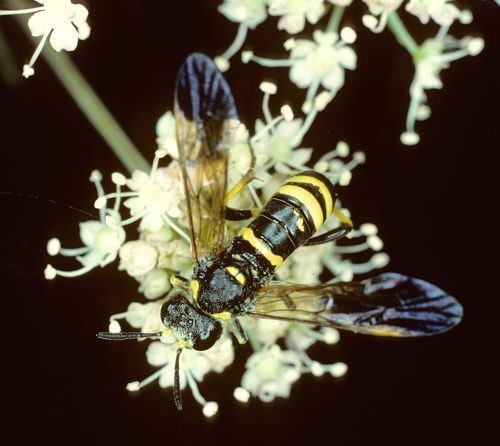 SUB-ORDER APOCRITA – (Hymenoptera with a ‘wasp-waist’)

PARASITICA – Parasitic wasps & Ichneumons (basically stingless, many with more than 16 antennal segments). The very term 'wasp-waist' comes from this sub-order. These insects lay their eggs on or in larvae of their hosts, paralysing them, to keep the food source fresh for consumption by the new larvae as they hatch and grow. 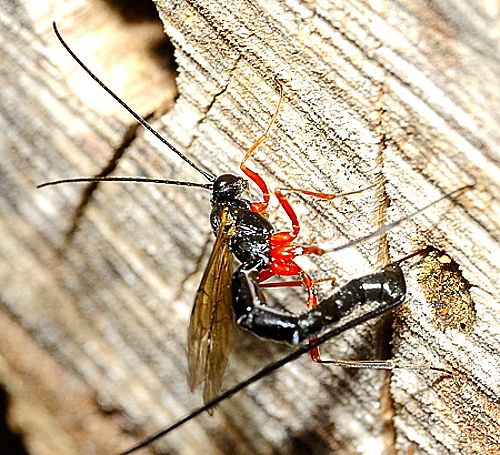 ACULEATA – Bees, Wasps & Ants (stinging insects, antennae with less than 13 segments). An extremely varied sub-order. Some are pollen feeders, others sting their prey and feed them to their young. Some are social, many are solitary. The following sections enlarge upon this and explain.