February 21st 2012. The first entry in this on-line diary originating from the heart of the Somerset Levels.

A very loud, deep drone was the first indication of a queen bumblebee in the garden this year. She was a very large specimen of Bombus terrestris, so often the first to be seen in early Spring - what a welcome sight after the recent spell of bad weather which did not  to seem to want to end. She will have been roused from her underground chamber, where she overwintered, by the increased light and warmth and will be searching for a place to start her new nest under the soil. In Britain, usually only the new queens survive the winter to perpetuate the race.

THE CHANGING CLIMATE has brought some interesting and varied alterations to our native fauna in recent years. In 2001, numbers of an European and Asian bumblebee were discovered near Southampton. Bombus hypnorum has now arrived in Somerset.

Although I did not see Bombus hypnorum until 2011, it had been reported from the area in the previous year. My own discovery actually started in my garden, which location made it even more of an event. Since then, I have found it in a number of places in Somerset, while it is reported widely throughout the country.We are used to seeing the very common Bombus pascuorum, with its sandy or buff general colouring. The obvious difference between B.pascuorum and the new bumblebee is that the latter has a black abdomen with a snow white tail; B. pascuorum always has a coloured tail.

TWO METHODS have been used for studying Hymenoptera locally. One is a long-running series of visits at weekends to various local reserves or wildlife hot-spots, which the Somerset Invertebrates Group has been arranging. The other is much more personal, but has also been in existence for many years. When I first became interested in insects, I was told that the way to attract many varieties was to set up bamboos against a south-facing, unobscured wall, cutting the canes off so that one end is open and the other closed by a node. The results of this may be seen below 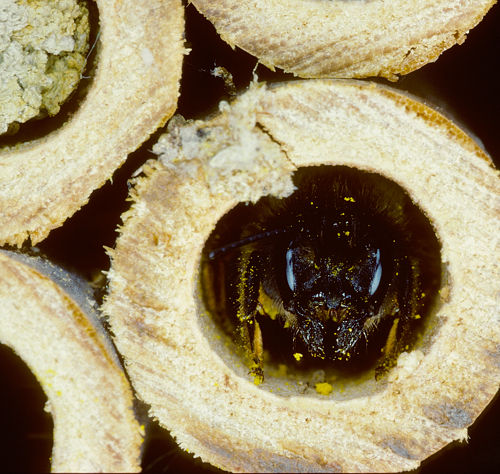 This worked amazingly well and they filled with solitary wasp and bee nests. The original use of bamboos has been considerably extended by drilling holes in logs, which have proved even more popular. To date, 64 different species of Hymenoptera have been identified using these holes for nesting.

INSECT BEHAVIOUR has been much affected by the unusual end to the 2011 summer. I was astonished to see a digger wasp searching the drilled logs outside my study in early October, probing for a suitable nest site - several weeks later than in a normal year. Common darters are the last dragonflies to be seen, in huge numbers, but mid-October is later than usual, with some still mating. This follows a season when they had not been as prolific as usual.