December 2021: wildlife, from the Somerset Levels.

December 30th 2021. Went down to Catcott Lows when there was a brief period of sunshine in the morning - ostensibly on the way to household shopping. In the end stayed some while until I could put it off no longer. At first there was just one other fellow there who pointed out a complete anomaly, a Pochard drake happily diving in the shallow waters in front. Normally diving ducks confine their activities to the much deeper permanent ditch running down to the pump house. It was really strange to watch the duck dive and be able to follow his progress beneath the water. The bird was not actually visible but a clear disturbance on the surface meant it was possible to predict where he would emerge.

Elsewhere, Shoveler were congregating for some serious preliminary courtship, often coinciding with a fly past, drakes chasing a solitary duck. Even more Pintail were present just in front. They too were in courtship mode, leading to short flights after great deal of nodding and tail raising. 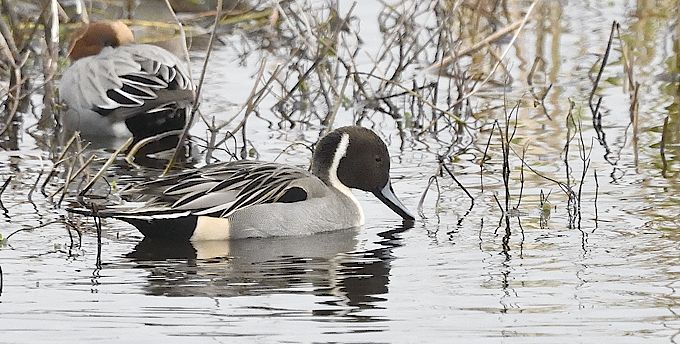 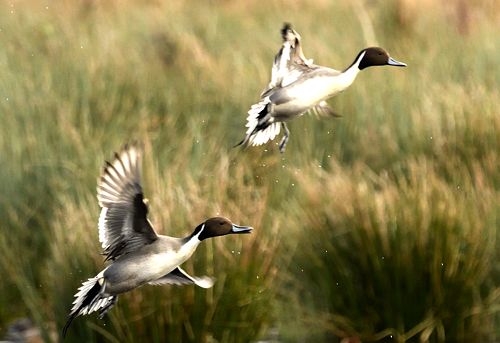 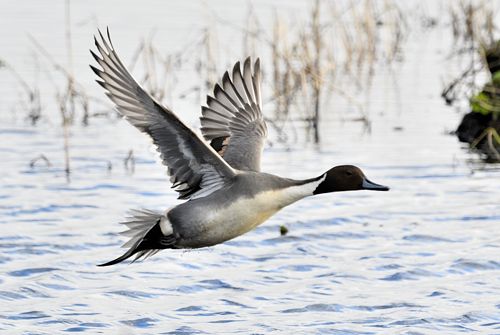 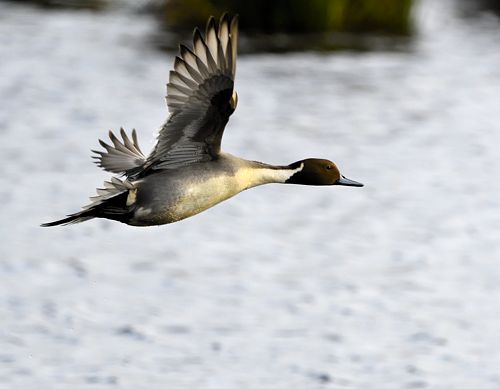 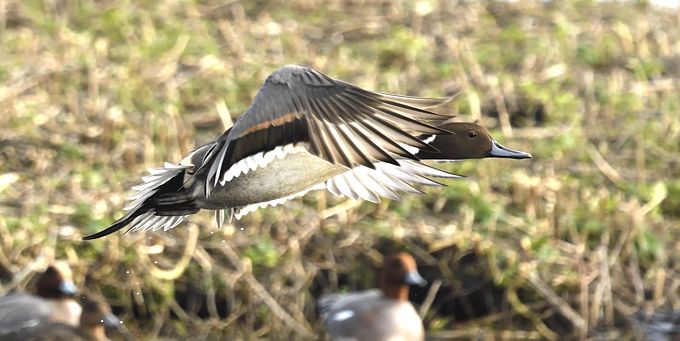 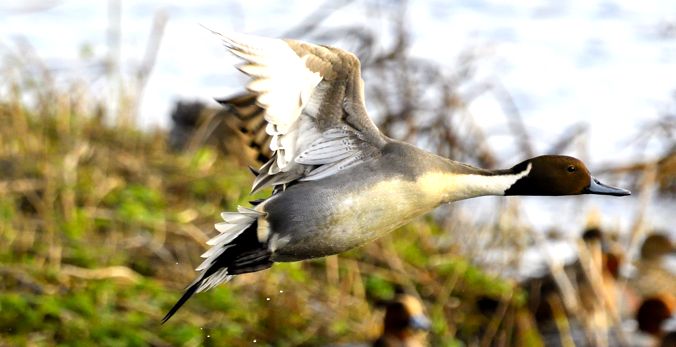 Strangely, there were no Teal present, though the earlier chap said that only Teal were present at Greylake - a flock of some 500. He also mentioned that Greylake was in a strange situation. It seems that the settings for winter water levels were messed up somewhere and, as a consequence, the water was very low and a deal of pumping was taking place to remedy it. This could explain why Greylake ducks have been limited in numbers recently, as a number of people have reported.

December 21st 2021. The deer family were busy in the garden this morning. Two were in the front garden, one lying in an open patch half-hidden by the yew hedge. Later all of the appeared on the steps above the house, before vanishing in to the top. 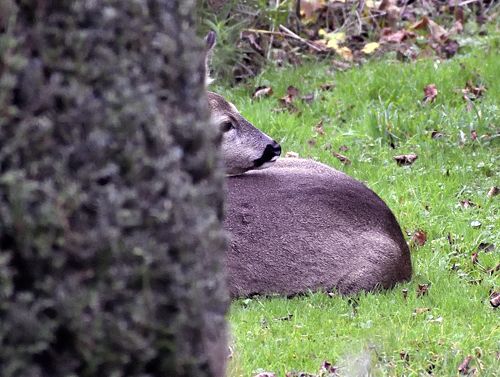 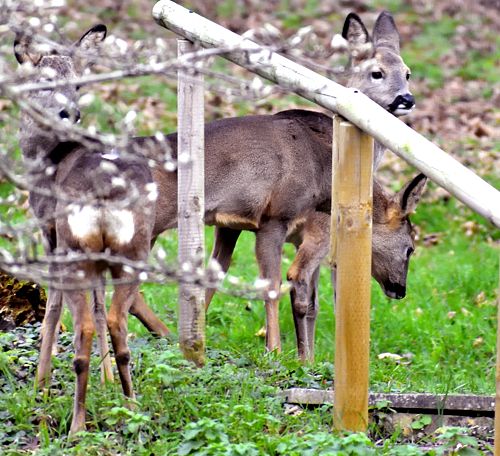 Roe deer, Capreolus capreolus, milling around on the steps

December 20th 2021. Four more Roe deer (Capreolus capreolus) appeared in the period between light and dark this morning. All we could see were the shapes of their distinctive white rumps as they paused on the steps before moving up the hill.

December 18th 2021. A comparatively late visit to Catcott Lows proved most interesting. I sat there with Graham and we watched it all unfold. There no less than three Marsh harriers in front, sometimes in full view alongside one of the large islands, at others slipping behind out of sight. Most of the time they were down on the flattened reeds but eventually flew around singly, mostly far off. All the pictures are blown up considerably but do illustrate what we saw. In the middle of all this, we realised that a buzzard was also involved. I caught a glimpse of him dropping onto the island. Binoculars showed it was tearing away at something it was holding. 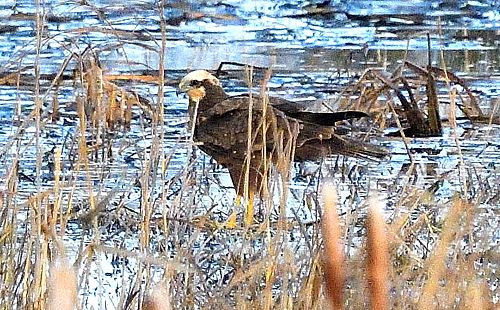 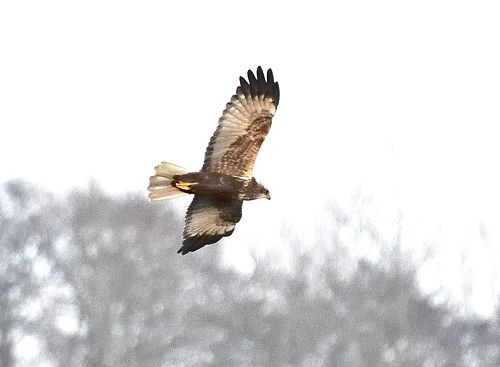 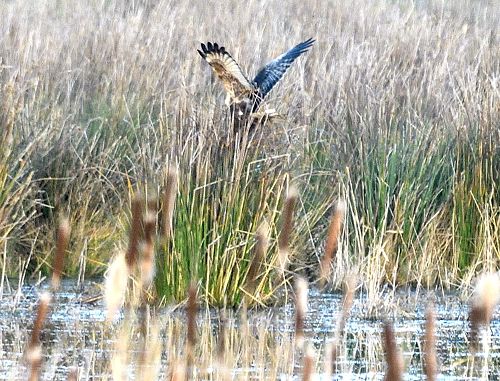 Common buzzard, Buteo buteo - this time with the feast

Ducks were very active. It was a joy to see a drake Common teal creep towards the near bank. Teal always used to enjoy feeding in the shallows nearby. His wife later appeared swimming towards him. Asa usual people's interest was captures by the Pintail. We have good number present, at least more than 10 drakes. As long as they stay, their later courtship flights should be spectacular. 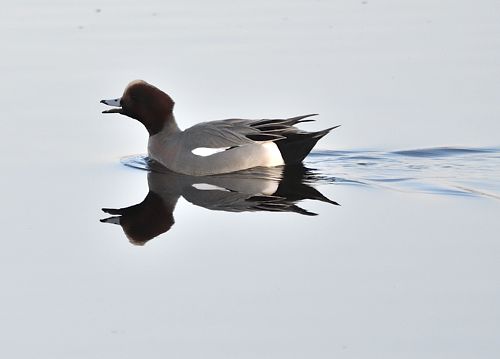 Wigeon, Anas penelope m - a near-silhouette against the light. 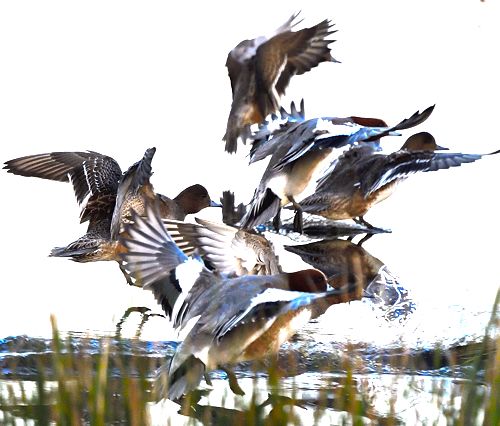 Wigeon, Anas penelope - a chaos of wings on take-off

Wigeon, Anas penelope - the foam and disruption of landing 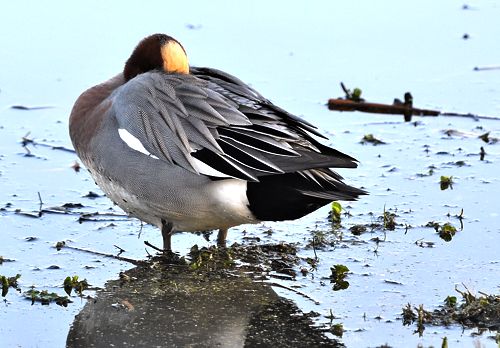 Wigeon, Anas penelope m - most however are at rest

December 16th 2021. It is an odd thing at this time of year, the mornings continue to get darker, earlier, though we are so close to the equinox that  you'd think they would remain the same. The last few mornings have been particularly so. At something past seven Romey called me to the bathroom window, deer were in sight. At first I could see nothing, then a couple of pale patches moved slightly. There they were, now trooping up over the top steps. Then there were three quite definitely, with the faintest impression of a fourth behind he others before they were sucked into the darkness further up. It was marvellous to see them in the  garden, rather than relying on the trail camera records. It is a long time since the last of these events. I have just finished reading a paper-back book given me by one of my children. It is probably the best general introduction to the world of insects I have ever come across. It is called simply, 'Extraordinary Insects', by Anne Sverdrup-Thygeson, a Norwegian Professor of life sciences, who writes beautifully, presenting a deal of knowledge in a most understandable and enjoyable manner. If you read this, you cannot but finish knowing a great deal more than when you started.

Catcott was full of Wigeon this afternoon, many of them grazing on the grassy strip in front of the hide. Every so often they would all leap into the air and land almost immediately on the water in front. Then they would slowly make their way back to the same area, before repeating the process. Was this a nerve game? 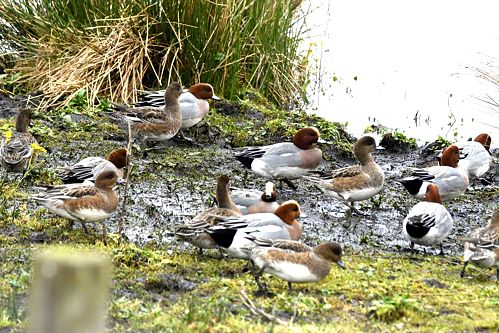 Wigeon, Anas penelope, grazing the edge of the pond 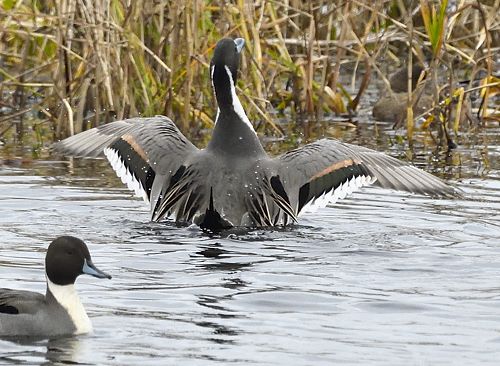 December 15th 2021. I reached Catcott Lows to find the water totally deserted, not a bird in sight, but an aluminium boat of the water, with two people on board. They were busy trimming the herbs and grasses on the small islands on the pond. I must say, I thought this was a good idea readying for the summer but someone else said it was a shame, killing all the over-wintering insects.

I must pause and give that thought. I suspect both could be considered the right decision, depending where you come from at that time. It was good to hear someone coming to the defence of insects. On the way, I paused by Tim's flooded field on Tealham Moor to watch a Great white egret stalking across the extremely shallow water in search of prey. As so often, these were minute creatures, almost invisible in the bill - but obtained regularly. 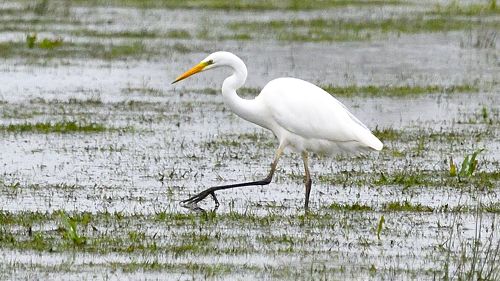 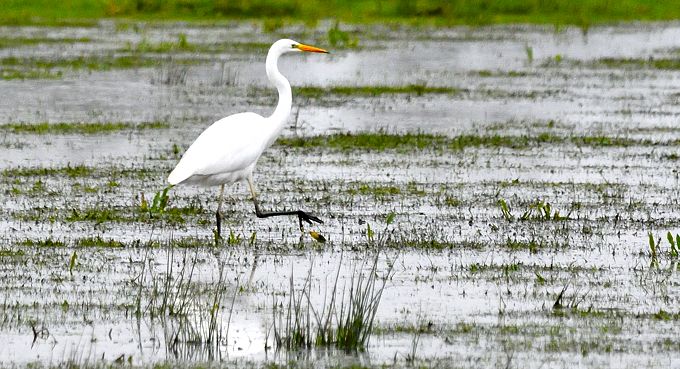 Great white egret, Egretta alba, on the way back

December 10th 2021. The reason not much has been added this month is not the weather, though it varies considerably. It is a combination of the shortness of the day and the usual preparation for Christmas, which absorbs so much time. Time rushes on towards that all-consuming festival. Will it take place in any recognisable form, or will we be completely shut down? The Omicron variant of Coronavirus has just brought in 'Plan B' of government strategy, but will it be enough? We are back to wearing masks virtually everywhere except outside, which perhaps should never have been relaxed. A few other things, affecting large mass gatherings, working at home where possible; but now we are in the hands of the scientists reviewing the potency and transmissibility of the virus.

A late afternoon visit to Catcott Lows found a row of friends in the hide and the most wonderful colouring creeping over the herbage as time wore on - and as the pictures show. The mainstream studies were of Marsh harriers and Cormorants, not often put together on a shoot.

Dropping down from high above, the harrier appears among and over the duck as they rise up when she passes over. At times individuals are really close but she continues on her way, apparently oblivious. I have wondered before whether harriers and other predators get bored and decide to make life more exciting by disturbing the duck. Certainly, Peregrines appear to take great delight in sending the lot up with no thought of attack. As we find out more about animals it is becoming clear that even the tiniest enjoy many different emotions and behaviour. 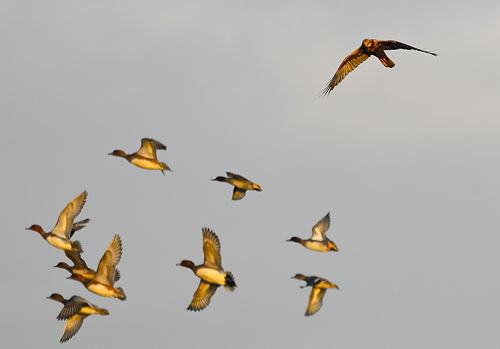 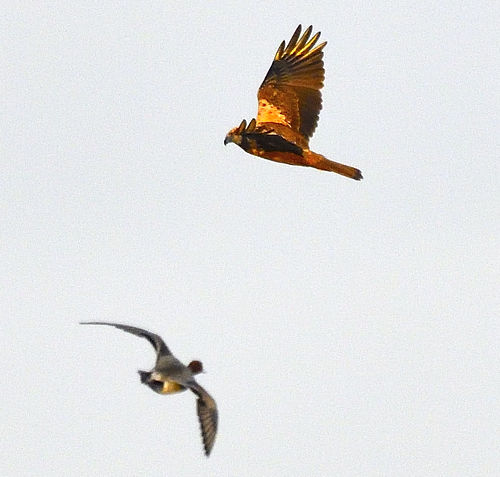 This particular harrier was a glorious patchwork quilt of colours, exaggerated even more by the low sun. While she is a female, I think she is is in the final stages of juvenile plumage. If ever a species varies, the Marsh harrier does at this time of year. It can be frustrating but also adds greatly to the interest of getting to know them. 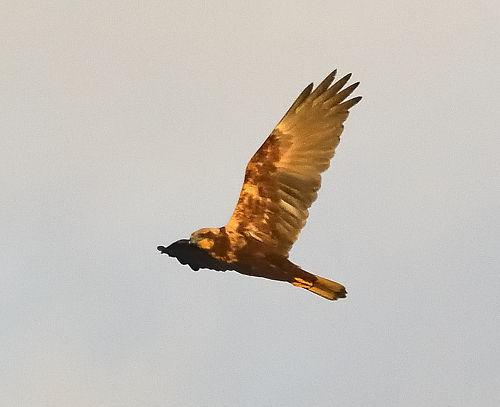 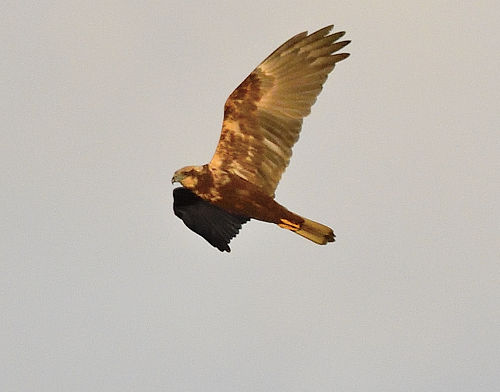 I was particularly pleased to get this picture of the harrier dropping down for a search. It is tricky to follow the bird without that vital focus point drifting back into the background which was so close and dark. She is spot-lit in front of the sombre trees, far-off but still sharp. 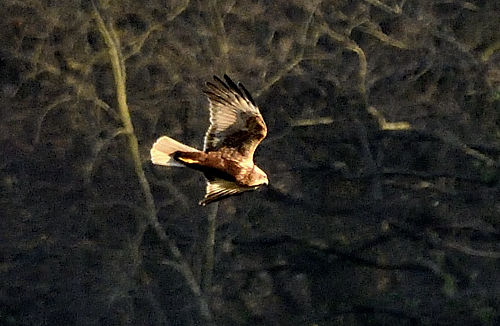 Cormorants have always been among my favourite birds. They are a very old race - far older than us and still look like as if they are in the age of pterodactyls. They are big birds but dive with remarkably little fuss or disturbance, literally slipping beneath the waves and reappearing somewhere else with no warning or disturbance. I know fisherman dislike them, as they are in competition for the same prey, but I welcome their presence on the waters I am watching. Rather than simply floating asleep, as so many duck do at this time, they are always in motion, fishing , flying in and out, exploring. The only time they are quite still is when they hang their wings out to dry - for their feathers are not waterproof, a sad development of their evolution. 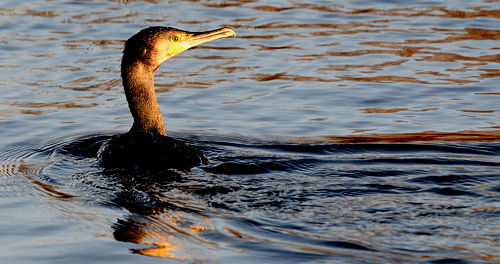 Cormorant, Phalacrocorax carbo, swirling back from the dive 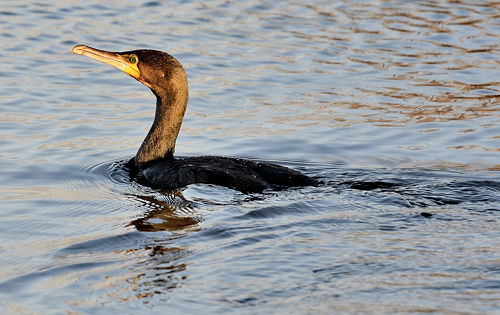 Swans and duck made up the rest of the inhabitants this time. The swans, as so often, restless, appearing never satisfied as to where they were, lifting up and settling not far away. The duck spent much of their time sleeping, heads tucked in. I presume they do the majority of their grazing during the night. As it is, it seems an idyllic life. 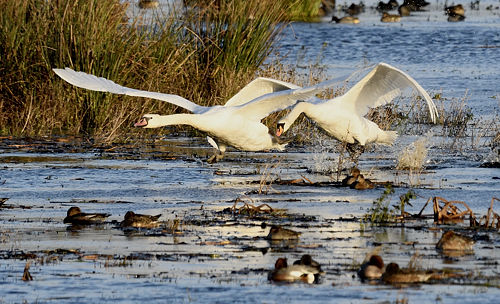 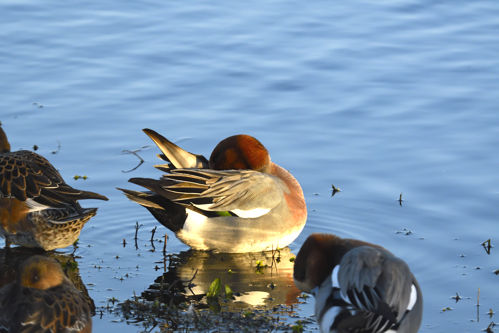 December 3rd 2021. Winter at last, get out the ancient bad-weather gear, expect high winds and frosts - perhaps some snow. The new month has started badly, cold with lots of wind. Little opportunity to go out and find any wildlife. However the past week or so have brought some fine pictures on the trail camera, particularly with Roe deer. They have been visiting the garden for many nights, though there have been no signs of them during the full daylight. One morning there were some shots of a doe in that extraordinary period when it is neither dark, nor light. The camera does not know what to do with this either. They are not night shots but, in effect, a black and white version of the colour pictures, if that does not seem too odd, producing a strange, ghost-like result. Nothing is mentioned about this in the camera manual or website. 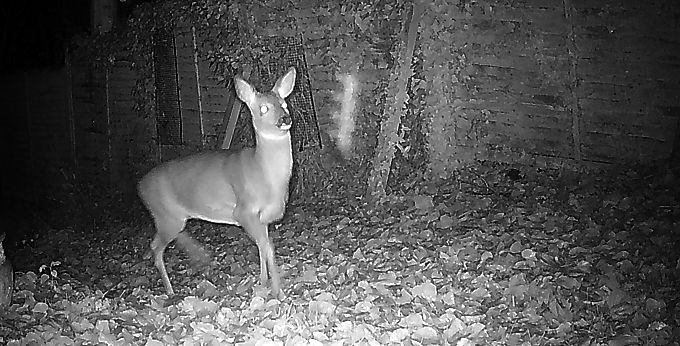 The outside world says that there are many fewer Badgers in the area after a local control campaign. All I can say is that plenty of Badgers pass through the ancient pathway during the night. Foxes are also plentiful, often a bit straggly, scruffy; sometimes with prey in their mouths. Most visiting Roe are adult females, usually plump and well-fed, but a buck appears every so often with a good, full set of antlers, body sleek and elegant.