The drawings represent fresh bumblebees with the banding and colours representative of the ‘standard’ bee of each sex. They may appear quite different at later stages of life. For instance, I saw a cuckoo bumblebee on a garden flower in August and the bands were near-white on black, rather than shades of yellow on black and white. However, these drawings present what a freshly-emerged bee ought to look like.

True bumblebees are, on the whole, covered throughout with hairs, the females have glossy flat rear tibiae with a long fringe of hairs forming the pollen basket; their heads are generally hairy.

Bombus hortorum (Linnaeus 1761) The Garden bumblebee
Common, especially in gardens. Known from its very long face and tongue, as a differentiation from the similar but short-faced B. jonellus. Lengths: queen 17-22mm, male 13-15mm, worker 11-16mm

Bombus humilis Illiger 1806 Brown-banded carder bee
Very rare in Somerset. One of the all-brown bumblebees, with brown band at base of abdomen as distinguishing mark. No black hairs on the abdomen, but some at wing bases. Lengths: queen 16-18mm, male 12-14mm, worker 9-15mm

Bombus hypnorum (Linnaeus 1758) Tree bumblebee
Becoming common in gardens. Similar to B. pascuorum, but with a white tip to the tail instead of coloured. A fairly recent arrival in this country which has found local conditions perfect. Lengths: queen 15-20mm, male 14-16mm, worker 8-18mm

Bombus lapidarius (Linnaeus 1758) Red-tailed bumblebee
Common in gardens and elsewhere. Queen and worker separated from the much rarer B. ruderarius by having dark hairs on the pollen basket, and B. rupestris by the latter’s characteristic cuckoo appearance and bald head. Lengths: queen 20-22mm, male 14-16mm, worker 11-16mm

Bombus lucorum (Linnaeus 1761) White-tailed bumblebee
Common in gardens and elsewhere. Workers may be tricky to tell from B. terrestris but a completely snow-white tail indicates B. lucorum. Lengths: queen 18-21, male 14-16mm, worker 9-17mm

Bombus ruderatus (Fabricius 1775) Large garden bumblebee
Probably local and uncommon, but only recently have keys been produced which distinguish it from B. hortorum, but only on dead specimens, so current position can be said to be unknown. Lengths: queen 21-24mm, male 15-17mm, worker 11-18mm

Bombus soroeensis (Fabricius 1777) Broken-belted bumblebee
Local and rare. Broken band on middle of abdomen is characteristic. This appearance can appear on other species as a temporary aberration while feeding but, if it remains, this is a defining character together with white tail separated from the black by a peach-coloured rim. Lengths: queen 15-17mm, male12-14mm, worker 10-14mm

Bombus sylvarum (Linnaeus 1761) Shrill carder bumblebee
A few years ago, it was relatively common in parts of the Levels but has once again suffered a drastic reduction. A very local rarity. The subject of much research in Somerset over the past ten years or so. Characterised by the black-haired band between the wings and a very high-pitched note in flight. Lengths: queen 16-18mm, male 12-14mm, worker 10-15mm

Bombus terrestris (Linnaeus 1758) Buff-tailed bumblebee
Common in gardens. Difficult to distinguish between B. lucorum workers and this species, though a degree of colouring in the white of the tail generally confirms it as B. terrestris. Lengths: queen 20-23mm, male 14-16mm, worker 11-17mm

Cuckoo bumblebees have a deal of dark body chitin showing through sparse hairs, particularly on the abdomen, giving a glossy, banded appearance; the females have matt, rounded, rear tibiae and clearly do not have a full surround of stiff hairs. Their wings are dark and they have rounded, often near-bald, shiny heads.

Bombus barbutellus (Kirby 1802) Barbut's cuckoo bee
A cuckoo on B. hortorum, but not as numerous as its host. In common with B. bohemicus, this species appears to rapidly change its appearance from the immaculate colours shown in books. They quickly fade to grey or silver in place of the yellow, making identification difficult. Lengths: female 17-19mm, male 15-16.5mm

Bombus bohemicus (Seidl 1837) Gypsy cuckoo bumblebee
Cuckoo on B. lucorum. Much less common, and difficult to distinguish from, the similar B. vestalis.  The colouring overlaps and the key difference, the comparative antennal segments are not that certain. See remarks above also. Lengths: female 18-25mm, male 15-18mm

Bombus campestris (Panzer 1801) Field cuckoo bumblebee
Cuckoo on B. pascuorum and is said perhaps to parasitise the other brown bumblebees. Does not appear to be as common as the other cuckoos, but widespread. The only one with yellow-brown on the abdomen. Lengths: female 17-18.5mm, male 15-16mm

Bombus rupestris (Fabricius 1793) Hill cuckoo bumblebee
Cuckoo on the very similar B. lapidarius. Appears to be extremely rare in this county, but this may be partly because of this similarity and confusion. Lengths: female 18-23mm, male 14-17mm

Bombus sylvestris (Lepeletier 1832) Forest cuckoo bumblebee
Cuckoo on B. pratorum and, perhaps, B. jonellus. I suspect that this bumblebee may be commoner than it appears to be, as it is so comparatively undistinguished in appearance. Females have an under-curved tip to the abdomen which, once spotted, is a readily-remembered characteristic. Lengths: female 14-16mm, male 13-15mm

Bombus vestalis (Geoffroy 1785) Vestal cuckoo bumblebee
Cuckoo on B. terrestris, itself common. The commonest of the various cuckoos, seen in gardens as well as the wider countryside. The small side patches of yellow between the white tail and the black band on the abdomen, may become complete but narrow bands, which may be confusing. Lengths: female 20-22mm, male 15-17mm

The pictures below are taken from  'British Bumblebees, with emphasis on the old county of Somerset', by robin williams 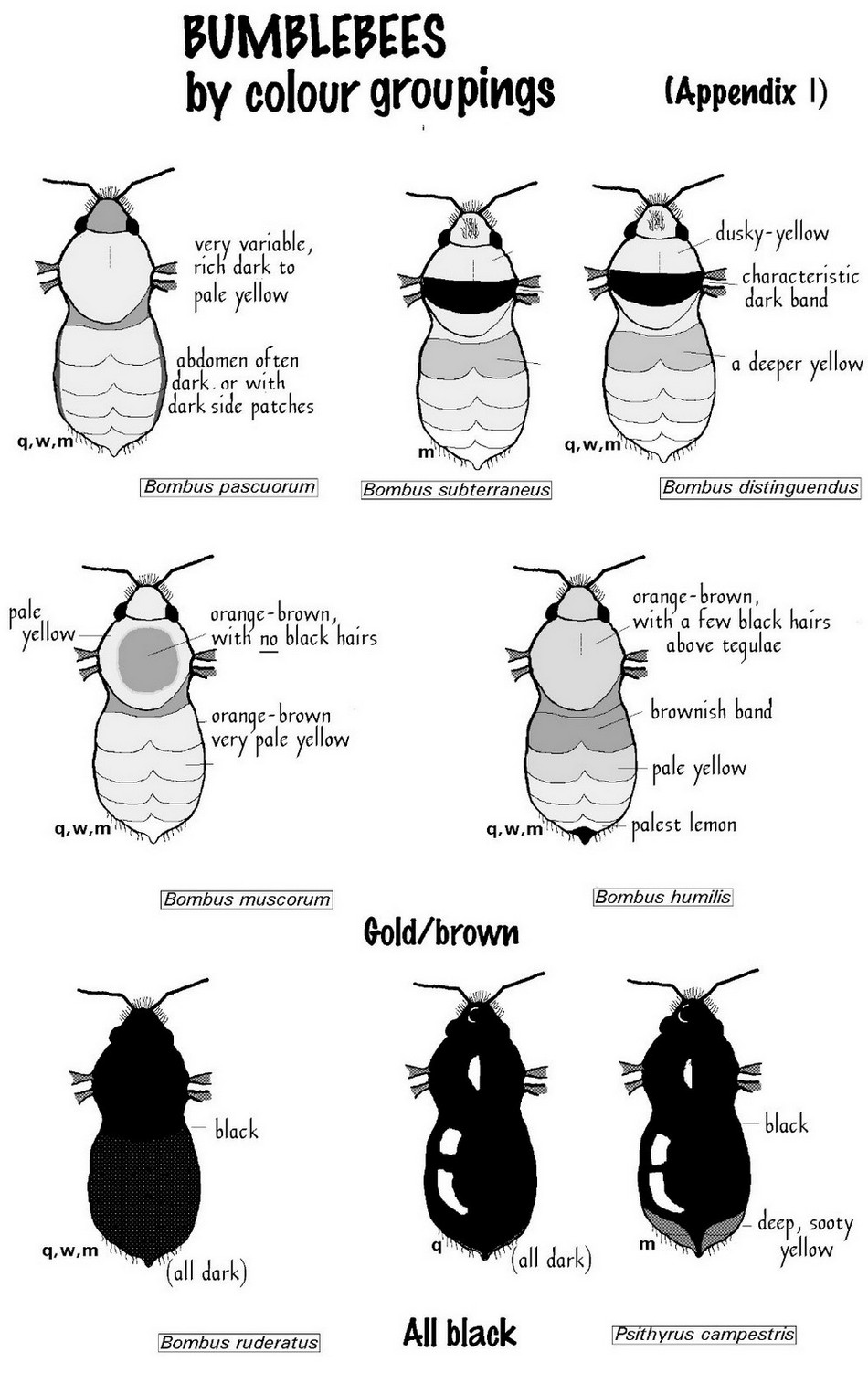 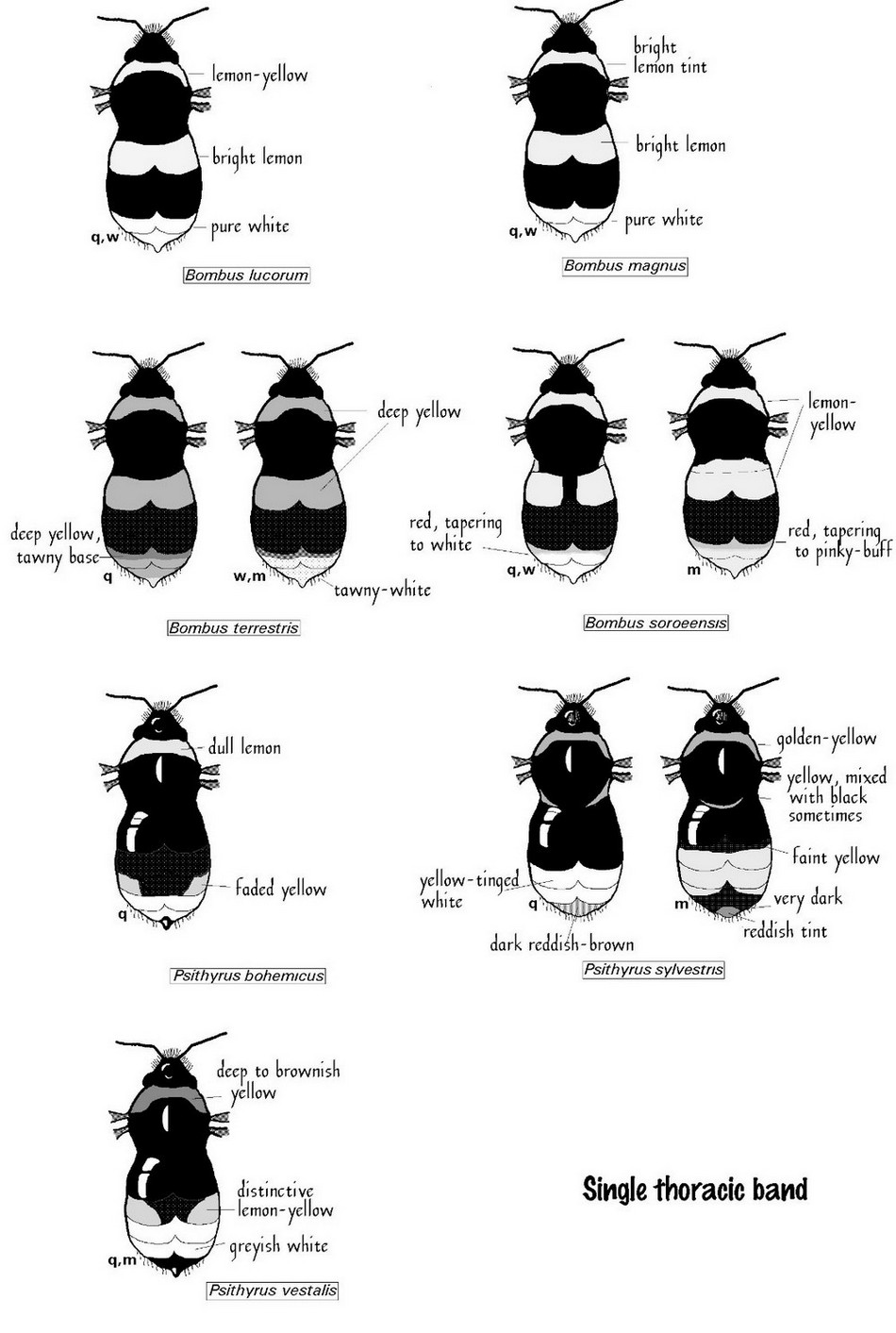 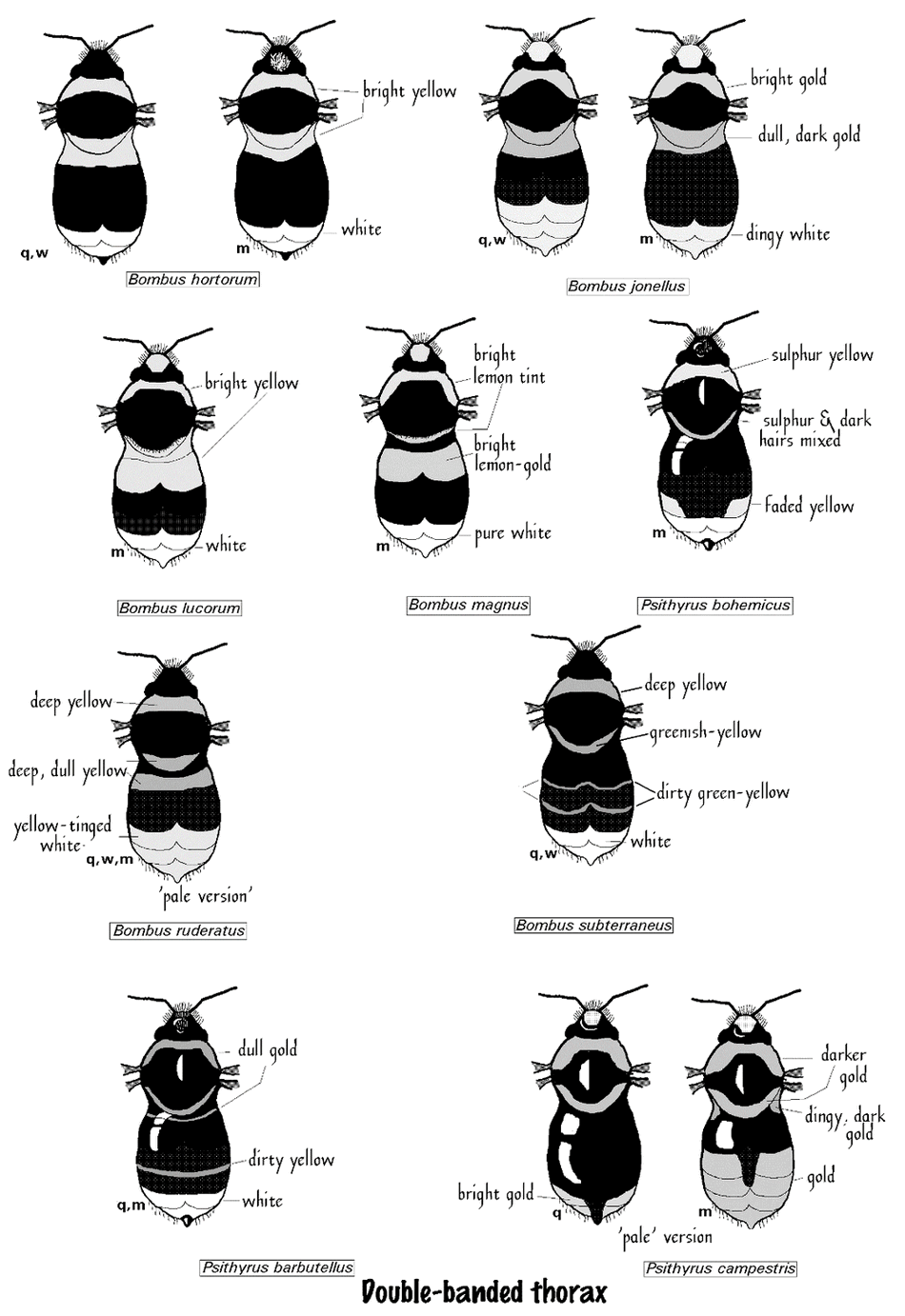