These keys cover a variety of sources, some available new, while others are recently or long ago out of date. Don't despair, there are numbers of entomological book shops out there and there is a ready market and availability for such works, which come and go with time. Most importantly, the  Royal Entomological Society offers free downloads for their out-of-print keys, though I should warn that many of these are heavy-going, laden with scientific jargon and very much of their time. 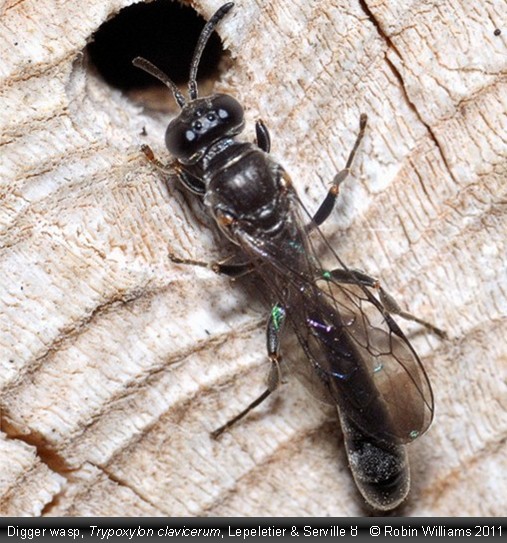 Bees, Wasps & Ants: a Key to the Genera of the British Aculeates; by Pat Willmer; AIDGAP; Field Studies 7 (S16), 1985. 'An easy-to-use guide designed to make separation into genera easier for the non-technical'.

British Species of Andrena & Nomada; by R.C.L. Perkins; pp 218-319; Transactions of the Entomological Society of London; 1919. 'Invaluable as a way of checking conclusions. Although the scientific names may have changed, this does not prove too much of a problem'.

British Species of Megachile; by R.C.L. Perkins; pp 95-101; The Entomologists Monthly Magazine; May 1925

Bumblebee Distribution Maps Scheme: Guide to the British Species; by D.V. Alford; (from Entomologists Gazette Vol 21), Bee Research Association, 1973. 'A slender paperback which contains all the information needed to identify bumblebees through the microscope and in the field'.

Hymenoptera Aculeata: a descriptive account of the families, genera and species indigenous to Great Britain and Ireland, with notes as to habits, localities, habitats etc.; by Edward Saunders FLS, L. Reeve & Co, 1896. 'A quite amazing book, though long out of date as regards nomenclature. Contains full descriptions of species – which are still not available in any other book. Still important and most helpful in identifying species'.

Hymenoptera, Chrysididae: Cuckoo-wasps: Vol 6 Part 5; by D. Morgan; Royal Entomological Society of London; Handbooks for the Identification of British Insects, 1984. 'Excellent keys to species, though the whole classification is presently under study'.

Hymenoptera, Formicidae: Vol 6 Part 3c; by Barry Bolton & Cedric A. Collingwood; Royal Entomological Society of London; Handbooks for the Identification of British Insects, 1975. 'Difficult but complete keys to species; other books are easier for the amateur enthusiast'.

Handbook of the Bees of the British Isles (2 volumes); by George Else & Mike Edwards;  The Ray Society 2018.  'The most important scientifically-based book on bees in Britain since Saunders in the late 1890’s. It contains brand new, highly tested keys for all British species, fully illustrated with detailed drawings filling a real need.'

The Bumblebees of Essex; by Ted Benton; Lopinga Books, 2000. 'Although covering Essex, much of the work applies all over the country with some of the finest photographs of bumblebees. A worthwhile addition to any library'.

The Specidae (Hymenoptera) of Fennoscandia & Denmark; by O. Lomholdt (in English); Fauna Entomologica Scandinavica, Volume 4, Second edition, 1984. 'Covers most, if not all, British species. Really well illustrated with clear keys. Discusses which species are found in UK'.

Solitary bees; by Ted Benton; Naturalists' Handbooks 33, Pelagic Publishing 2017. 'Another superb book by Ted Benton. A comprehensive coverage of the subject with newly-developed keys by Graham A. Collins'.