October 2021: wildlife, from the Somerset Levels

October 11th 2021. When the bedroom curtains were pulled open, a sheet of white mist billowed over the moors below, with the top of the Polden hills crystal clear beyond. This was the first truly autumnal day on the Levels, a time immemorial where cattle apparently walk with heads or legless bodies showing. In half an hour it was all gone, revealing a clear, bright sunny view which persisted through the day where we could see. I decided to re-visit Westhay Moor to see if I could have another glimpse of the Bearded reedlings. In spite of being told that they were to be found at several points in some numbers, I had no luck. During my walk up Daggs Drove, said to be the focal point, my best link was a solitary 'ping' in the middle of a large reed-bed. I talked to others met on the drove and they reported the same. This was possibly due to thick cloud covering Westhay Moor for most of the visit. It seems our moors maintained theu sun during all this time according to Romey. Never mind, the walk was enjoyable. Later, I climbed into the car once more and made for Catcott Lows, which I found empty of people, though a very quiet couple came towards the end of my quite lengthy stay. It was lovely there, peaceful, warm, the water in front absolutely still - perfect conditions. I cannot claim it was bustling with wildlife, nor were there visits from rarities, but it was interesting, as well as peaceful. I suppose the only 'rarity' was a lone female Kestrel, a bird that has moved from abundance in the area to an unusual sight in a few short years. Otherwise, all were common, local birds but fascinating for all that.

October 9th 2021. Another perfect autumn day, brilliant sunshine, virtually no wind. Kevin told me the other day about the invasion of Bearded reedlings, or Bearded tits as I had long known them, so I was determined to try and spot them. The island hide off the drove up from the Westhay Moor car park was the focal point. I reached there after searching each side of the drove, no luck. The hide brought no more luck. Then I started chatting to another chap who could no longer hear their call but had very sharp eyes. I heard the characteristic 'ping' just as we saw a small bird fly across the water into the reeds close to me. The reeds shook and I pointed the lens in that direction. There was a shadow in the viewfinder and a series of pictures were taken of which two are shown below. The quieter-coloured female was clearly shown, such an exciting moment after all these years. My previous sightings were on the Norfolk Broads when I was sixteen and in Holland thirty years or so ago. 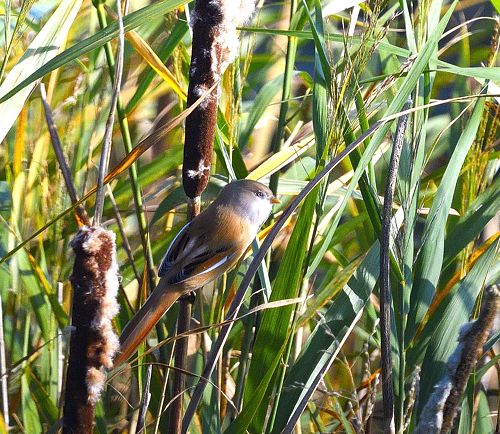 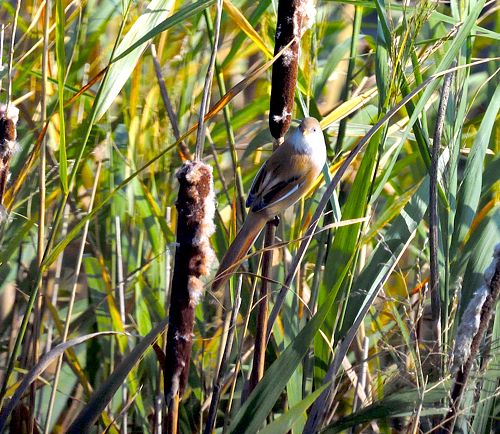 After a reasonable time in the hide, I decided to go on to the tower platform in the centre of the main reed-bed to see how the Marsh harriers were doing. Looking back, I think I should have stayed where I was, but there were on or tow interesting events. A Marsh harrier did appear but way up above, where it was being mobbed by a crowd of the crow family. These smaller bullies just would not leave it alone. They must have driven it up, it is most unusual to see a harrier very far off the ground. 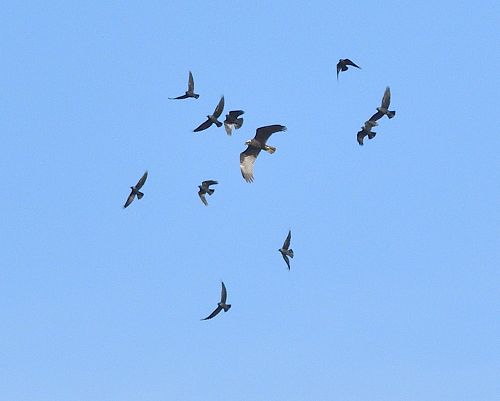 A Gadwall was captured as it erupted from beneath - most unusual for a surface-feeding duck. Could it have been attacked from below?

Finally, after studying the acres o reedbeds in front, hoping to locate where the harriers may be nesting, a heron flew in, tiny against the background, and disappeared beneath the reeds, possibly another ground-nesting heron as I have come across elsewhere in the area. 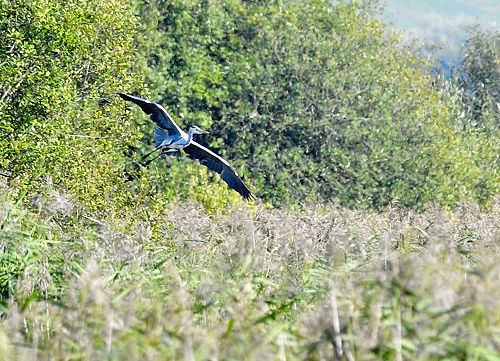 October 6th 2021. After terrible storms for a few days, today was miraculous, crystal clear air in bright sunshine, with moderate breeze. I seized the occasion and drove over to Westhay Moor NNR. Kevin was in the car-park and told me about what was around, in particular there were Bearded reedlings Panurus biarmicus in large numbers (though you have to be there in the morning to actually see them). I made my way to the tower hide (platform) where I had extraordinary luck in that, as I climbed the ladder, a Marsh harrier flew across the front reasonably close, providing me with some memorable shots. 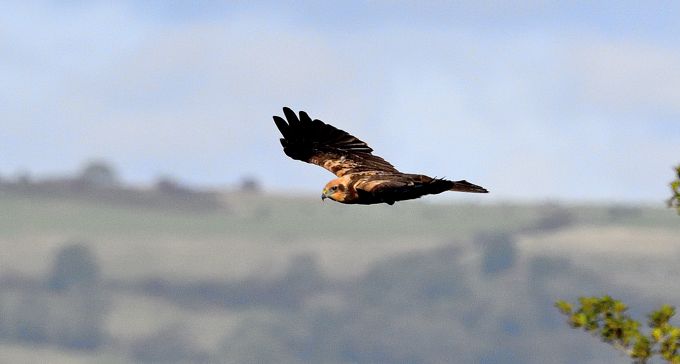 The only insects I spotted were butterflies. Everything else has vanished or hidden itself. They appear so delicate but survive later than most and manage to cross the seas on long journeys.

October 2nd 2021. It is much colder, after a very unseasonal September with continuous above-average temperatures. Apart from various darters and a few butterflies, nothing else is flying, even the last of the bumblebees. 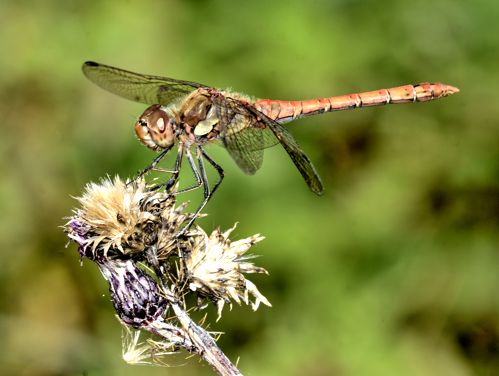 It is always sad when you realize that you will be without the insects for a few months, the macro lens put away once more. Apart from the three egrets, there will be a gap when birds do not take up the slack, a somewhat dead period of the year. Long periods of rain and high winds have kept us indoors recently and it seems will continue into the future. It is a shame there is little to report at this time except how nice a good pub meal was today under the shadow of Brent Knoll. Pints of beer taste better as the cooler weather strikes.