Bumblebees appear easy to identify, as books and charts show them with clearly-defined coloured bands or other easily distinguished features. Sadly, this may not be the case, as some insects may have had the hairs of the bands worn away, others have lost most of the colour in the bands while some may have been borne with missing or even extra bands. Besides that, the location of bands where the abdomen meets the thorax can be difficult to determine. Is the band on the thorax, on the abdomen, or are there two separate bands, vital distinctions? This ought not to put people off studying these fascinating creatures, rather to warn that what you see, may not be what you imagine. In other words, identification may require far more than a cursory glance. Digital photography has brought with it the possibility of taking numbers of pictures from differing angles, then examining the appropriate features in detail on the computer. But the final arbiter of any difficult case must remain studying a specimen under a stereo microscope. Males are the choice, as they only have one function and there is always a surplus; nevertheless, unless absolutely essential for scientific reasons, my feeling is never to kill them, enjoy them as they are, even if not certain of the species in the end.

Somerset: Each part of Britain has its own regulars and specialities, so this section refers only to those species presently found in the ancient county of Somerset, with all its varied landscape and gardens. This encompasses farmland, rolling hills, the wild expanse of Exmoor, the great wetlands of the Somerset Levels and Moors, the Quantock Hills, with Mendip rising starkly up from near sea-level to over 1,000 feet.

Cuckoos & true bumblebees: Bombus is divided into two distinct groups; 'true' bumblebees, which are social, and 'cuckoo' bumblebees which depend on the first group, without forming a social group of their own.

True bumblebee colonies start each year with the emergence of an over-wintering queen from her underground resting place. She had been fertilised the previous year and lays her first eggs in spring, rears them, feeding and tending the larvae herself. This first brood is made up of workers who then take over the other duties of the queen, leaving her to concentrate on egg-laying. The eggs are laid in wax cells containing honey made from nectar, very similar to those made by honeybees. Later in the year, males are produced alongside the workers and eventually young queens, who will over-winter to form the next generation. Bumblebee nests may be on the surface or underground, depending on the species, and vary from a dozen or so inhabitants to hundreds. 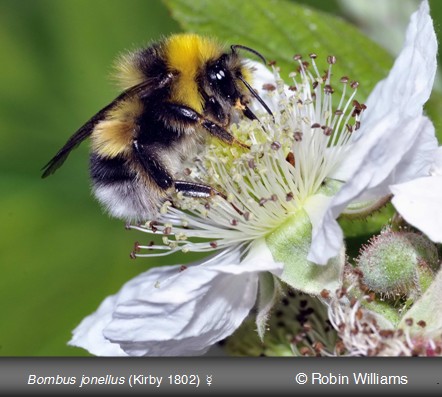 The second group contains the cuckoo bumblebees, which do not make a nest of their own, but take over those of another bumblebee species. A female cuckoo bumblebee forces her way into the nest and either kills the existing queen or simply ignoring and side-lining her. They 'persuade' the other workers to rear their young, as if they were their own.  Those most likely to be found in gardens, are Bombus campestris, B. sylvestris and B. vestalis; while B. barbutellus, B. bohemicus and B. rupestris are distinctly less common. 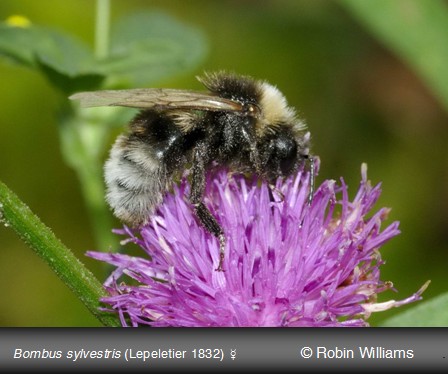 Relative abundance: Gardens are possibly the most important of all these habitats, being responsible for helping maintain the seven common species so vital in pollinating trees, flowers and crops. These 'true' bumblebees, Bombus hortorum, B. lapidarius, B. lucorum, B. pascuorum, B. pratorum, and B. terrestris have been recently joined by another, B. hypnorum, which has spread into England from the Continent in recent years, and is common in many gardens. Much more local are B. jonellus, B. monticola, and B. muscorum; while B. humilis, B. ruderarius, B. ruderatus, B. soroeensis and B. sylvarum are distinctly rare in this county.

These latter species are generally found out in the open countryside and have suffered as the ancient long period of wild flowering has been reduced by changes in agriculture. In the case of B. sylvarum, the species needs continuity of flowering from the start of the colony in April to October, when it dies out. Research indicate that a space of around a 100 square kilometres is necessary to provide a viable area for the colony to flourish, with continuity of flowering throughout.  Only large wild areas, such as are found round Shapwick Heath and adjoining reserves, are able to supply this; hence the reason for previously-common species reducing in number or dying out completely. Modern farming, whether grassland or arable, does not allow the continuity of flowering needed to maintain the colonies. The recent introduction of subsidies encouraging the planting of a wild flower strip round fields has shown promise in encouraging some of these less-common species.

Pollination: Why is all this important? Bumblebees are amongst the most vital pollinators of garden and wildflowers, as well as fruit trees, and our food depends on this taking place successfully. A great deal of research is going on into what to do about the continuing reduction in insect pollinators, while captive colonies of bumblebees have long been used to pollinate crops such as tomatoes in greenhouses. Let’s hope that the experts can come up with affordable ways of dealing with the problem. In the meantime, the more we can learn, the more we can help them survive.